The Top 10 Weirdest Eyes in the Animal Kingdom

From the grasses of Australia to the jungles of Madagascar to your own backyard, we’ve compiled our own top-10 countdown of the world’s weirdest animal eyeballs. 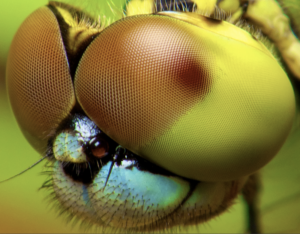 While human vision is tri-chromatic — meaning we see in different shades of reds, blues, and greens — dragonflies have an incredible total of 30 visual “opsins,” or light-sensitive proteins.  Dragonflies see the rainbow much differently than humans do: not only can they distinguish more colors on the visible spectrum, but they can also see ultraviolet light. Their eyeballs are comprised of 30,000 different facets, creating what scientists believe to be a mosaic of vantage points.  Dragonflies can see 360 degrees around themselves at all times, and are much more sensitive to movement than lesser-endowed insect species. How such colossal amounts of visual data are processed in the dragonfly brain is not yet known. 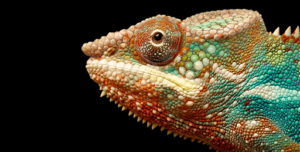 The chameleon has developed a unique combination of ocular talents.  Its eyes move independently of one another on a near-360-degree axis.  It can process both monocular and binocular vision, meaning it can see out of either eye separately or both eyes together.  The chameleon’s eyes are also located on opposite sides of the head and, without sockets, are allowed to protrude outward. Chameleon lenses are concave, increasing the size of images projected onto the retina and enabling refined focus.  The chameleon can hone in on insects with pinpoint accuracy and track their movement almost anywhere, without so much as a turn of the head. 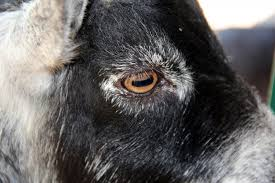 The goat’s unusual pupils evidence how predators and prey evolve according to different sets of needs.  While hunters, like cats and humans, need vertical pupils to see in both darkness and daylight, grazing mammals rely on horizontal pupils for a wider range of vision.  The shape of a goat’s pupils minimizes glare from midday sun while allowing plenty of periphery to spot oncoming threats. Goat eyes can also rotate 10 times farther than human eyes, maximizing the goat’s view while it continues grazing. 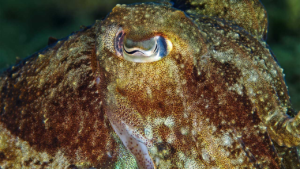 The cuttlefish is a type of marine mollusc with a distinct cuttlebone, or internal shell.  Its size can range from 6 to 20 inches in length. The cuttlefish has an enormous brain-to-body ratio, fostering a remarkable intelligence among invertebrates.  Although colorblind, it can “see” color through a device called chromatic blur.  When the cuttlefish changes focus, it sharpens objects of a certain color and blurs out others.  The bizarre “w” shape of its pupil exaggerates the blurring effect. 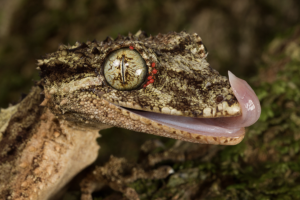 Clinging to the humid tree trunks and leaf cover of northeastern Madagascar, the leaf-tailed gecko is often misnomered as the “satanic leaf-tailed gecko” because of the blood-curdling screech it lets loose when threatened (sounds like a child screaming).  Similar to many other gecko species, it has no eyelids, instead licking its eyeballs to remove dust. The leaf-tailed gecko’s eyes are well-adapted to nocturnal bug hunts. 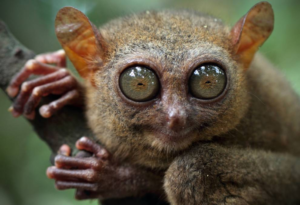 On the island of Sulawesi in Indonesia, the tarsier has eyes that comprise a whopping 1/12th of its total height.  Its eyes actually are equal in size to its brain, an unusual feature amongst primates. They compensate for a lack of tapetum lucidum, a layer of reflective tissue beneath the retina common in other nocturnal mammals.  The tarsier’s eyes are completely occupied by rods, dulling color while sharpening night vision. 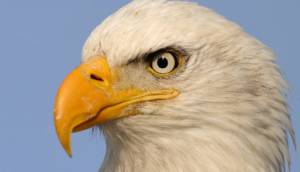 An eagle can spot prey up to 3 kilometers away.  Although only weighing in at 10 pounds, its eyes are the same size as a human’s.  Its eyes are fixed in the socket, necessitating remarkable head mobility. The eagle can switch between monocular and binocular vision, either seeing from both eyes independently or merging them together.  It has two fovea, or focal points, honing in on objects ahead and to the side all at once.  The eagle also sees more colors than humans can, including ultraviolet light. 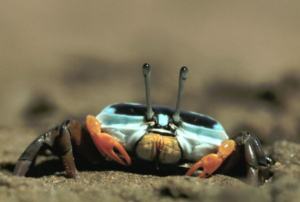 Similar to many insects, crabs have 9000 different eye facets that enable 360-degree vision (and overhead vision).  Crabs’ eyes are immobile, instead delegating certain areas of the eye to specific tasks. For example, facets on the horizontal plane are used to sharpen details, while upwards-and-backwards-facing facets only detect movement.  Crabs can also see a broader spectrum of color than humans: this comes in handy when detecting patterns of UV light on a potential mate’s shell. 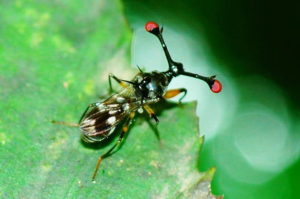 Found throughout tropical regions worldwide, evolutionary biologists have yet to determine why stalk-eyed flies developed their bizarre appearance.  One theory suggests that a wider eyespan improves the fly’s peripheral vision, although scientists have found that the “stalks” actually impede flight.  Unlike most other fly species, the stalk-eyed fly’s antennae are located on its “stalks” rather than on the middle of its head. Prolonged studies have proven that stalk-eyed flies use their eyespan as a mating mechanism: the farther apart the male fly’s eyes, the more success they will have with females. 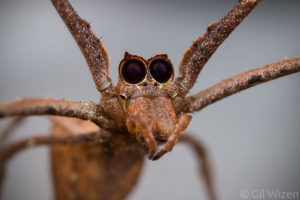 Measuring at around an inch in length (up to 3 inches with legs outstretched), the ogre-faced spider can be found in any Australian backyard.  They have the largest eyes of any arachnid. Known among scientists by its less ominous name, the Common Net-Caster Spider, this angry-looking insect is known for crafting precise targets with its web.  Although its two huge posterior median eyes definitely take center stage, ogre-faced spiders actually have six smaller eyes located just underneath. Scientists believe its excellent nocturnal vision allows the ogre-faced spider to hunt prey on the ground without threats from daytime predators– a skill that sets it apart from other web-dwelling spiders.

Although extinct, trilobites teach us more than any other organism about the evolution of sight.  Scientists identified trilobites as one of the earliest organisms (on record) with complex eyes.  Their lenses were made of calcite, allowing them to fossilize with the tribolite’s exoskeleton. Sensory cells behind the lenses connected the eyes to the brain.  Like most of today’s insects, trilobite eyes were appositional, meaning they offset their lack of movement through their compound structure. The arrival of complex vision may have been responsible for a flood of evolution known as the Cambrian Explosion, when prey organisms had to adapt to escape sighted predators.

We are here for you and want to assure you that we can take contact lens orders via phone 860-633-1401 and ship them direct to you. We are also available in the event of an emergency. 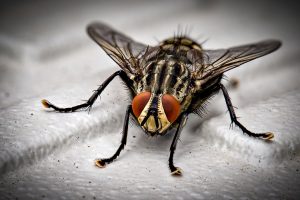 The Top 10 Weirdest Eyes in the Animal Kingdom

From the grasses of Australia to the jungles of Madagascar to your own backyard, we’ve compiled our own top-10 countdown of the world’s weirdest animal eyeballs.   1. Dragonfly (Photo Source: Rudi Gunawan) While human vision is tri-chromatic — meaning we see in different shades of reds, blues, and greens — dragonflies have an incredible total